The global initiative, which aims to develop a digital device to radically improve the detection of diseases that cause dementia, aims to secure at least £67million over its first six years. The initiative with funding from Bill Gates and others, will be overseen by a new Board of 10 prominent experts, led by former UK Prime Minister and President of Alzheimer’s Research UK, the Rt Hon David Cameron.

Dementia affects over 50 million people around the world, and there is currently no way to prevent, treat or cure the underlying diseases. Alzheimer’s disease is responsible for around two thirds of dementia cases, but other diseases can cause similar memory and thinking problems.

Noticeable symptoms of dementia may not appear until 20 years after a disease like Alzheimer’s begins in the brain. As with most progressive illnesses, treating the diseases that cause dementia as early as possible is likely to be the most effective approach. But today, diagnosing these diseases typically relies on doctors assessing a person’s symptoms – and while brain scans and other clinical procedures can support a diagnosis – there are currently no conclusive biological tests and, crucially, nothing that is financially scalable.

The EDoN initiative aims to detect these diseases by investigating a range of very subtle behavioural changes that emerge years before problems like memory loss start to affect a person’s day-to-day life. Sleep, gait, eye movements, speech patterns and mood can all be affected in the very early stages of the diseases that cause dementia. A digital device that can measure, combine and analyse changes in these behaviours has huge potential to detect a disease in its earliest stages, and could transform efforts to develop new treatments.

The EDoN initiative is bringing together teams of experts in data science, digital technology and dementia research to develop a cost effective, easy to use mobile app or wearable device that can reliably detect different diseases that cause dementia up to 10-15 years earlier than we do today. Partners in EDoN include world-leading universities, technology companies and data science institutes, such as the Alan Turing Institute – and the initiative is the largest of its kind to use digital health technology for the early detection of diseases like Alzheimer’s.

The donation from Bill Gates comes at a critical time when Alzheimer’s Research UK’s overall income is being threatened by the impact of COVID-19. With an aim to secure at least £67 million over its first six years, EDoN is ambitious – yet it has the potential to be a global game-changer when it comes to delivering life-changing treatments.

EDoN’s Board is chaired by former Prime Minister and Alzheimer’s Research UK President, David Cameron. The Board offers expert guidance that will help to drive the initiative forward and comprises representatives from the world of data science, Med Tech, clinical research, pharma and philanthropy. From NHSX, Eli Lilly and Biogen to EDDRP UK (Early Disease Detection Research Project UK) – the Board’s membership is testament to EDoN’s global and cross-sector approach.

The members of the Board are: 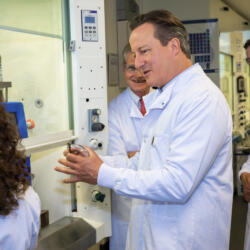 “The number of people with dementia is set to triple by 2050, to over 150m people around the world. Not only does this cause untold harm and heartbreak to millions of families, but it is completely unsustainable for our health and social care systems.

“Early detection is a critical missing piece of the puzzle when it comes to effectively treating this devastating condition. EDoN is bringing together leading international academics, technology companies, and clinical experts in an initiative with scope and ambition that reflects the scale and importance of the challenge we are facing.

“I am delighted to lead such a talented Board, with the experience and expertise to oversee a project that cuts across the private, academic, charity and public sectors – and, of course, to have the backing of Bill Gates, something that will be invaluable as this work progresses. I look forward to working with such an impressive group to ensure that EDoN delivers on its potential to reduce the impact of dementia and transform millions of lives.” 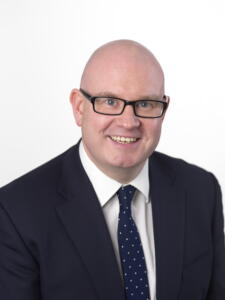 “Recent developments in data science, digital technology and research infrastructure mean that now is the time for the transformative approach of EDoN. We must move quickly to capitalise on these innovations, and we are incredibly grateful to Bill Gates for recognising the need for significant investment in this area and the huge potential of the EDoN initiative to transform lives. We are also indebted to our EDoN Board members for lending their expertise to guide the initiative as this work takes shape.

“This important backing comes as the COVID-19 pandemic is affecting the income of charities across the country and having a significant impact on dementia research efforts. While the pandemic has affected our ability to fund as much new research as we would hope, the whole of Alzheimer’s Research UK is working hard to make sure we can continue to support as much high-quality dementia research as possible, from researcher-led projects to strategic initiatives in key areas of research, including EDoN. Research like this has never been more important, and initiatives like EDoN are vital if we are to turn the tide on dementia and deliver life-changing breakthroughs for all those affected.”